Lego Scrum in the Big Apple

I've just got back from New York where I was attending the Big Apple Scrum Day to present a Scrum simulation session.

There were two main aims for the session, firstly and primarily to provide an introduction to Scrum for people new to the subject area but also to provide an example of a practical hands on learning experience which others may be able to use themselves in their own coaching efforts.

The basis for the session was the Lego Scrum simulation created by Alexey Krivitsky back in 2008. You can find more details on that here http://www.lego4scrum.com/. In general though, the session provides a practical learning experience, enabling participants to learn about Scrum by seeing and experiencing it in action.

We've been using a variation of this game now where I work for a while now to help create an increased awareness and understanding of Scrum across the organisation, including both technology and non-technology business areas. The response to these in-house sessions has been really positive with feedback including:


I think this concept is a great way to introduce people to the concept of Agile. It took me from very little knowledge to a position where I feel I understand the key concepts.

It was an awesome reminder of how good and simple games, executed well, can improve people's understanding of Agile (or anything, really).

The Lego workshop beautifully illustrated the focus on discrete deliverables that the business collaborates on. I also liked the emphasis on what Agile isn't.

The way it was presented, without a dry presentation, engaged me a lot more and allowed me to see how it can work in a more obvious and logical way.

On the back of this feedback I headed off to New York, with some fellow volunteers, to run the session at the Big Apple Scrum Day. The session is run broadly in line with what's outlined in Alexey's original document, with teams working to build a Lego city using the Scrum framework. Through experimentation and practice we've adapted some aspects of the simulation for our own use, with some of the main amendments outlined below.

Vision
We kick off the simulation with a vision which everything anchors back to; To build a Lego city with suitable infrastructure for healthy everyday living. This vision statement frames the rest of the simulation and is something that teams can refer back to to help guide and shape their building efforts.

Team focus areas
As per the original game all teams work to build a single city, thus it's a collaborative rather than a competitive effort. To provide as much focus as possible to each team we ask them to select a focus area e.g. housing, retail, infrastructure, energy and recreation. Each team contributes to the city according to their focus area. This also helps drive collaboration between teams as they need to work together to create a single integrated city, rather than distinct functional areas.

Dedicated Product Owners
When we first started using the Lego Scrum game one of the things we were keen to emphasise was the value that a dedicated a co-located Product Owner can add to a Scrum team. For that reason we run the simulation with a Product Owner allocated to each team. The Product Owner can then work with the team in a constant and on-going basis, highlighting the importance of continued customer collaboration through the course of a Sprint. The Product Owners are also co-facilitators, experienced in the Lego game. As such they can purposefully adopt specific behaviours and actions to draw out key learning points.

The downside to that model is that you need more than just yourself to run the workshop. For us it works, but if that isn't practical then perhaps there's a way for each team to allocate their own Product Owner. That's something that we're yet to try though.

Collaborative Product Backlog creation
Another key point that we wanted to illustrate with this simulation is the value that comes from collaborative Product Backlog generation. We wanted to avoid illustrating a scenario of the Product Owner handing over a pre-formed backlog to the team. As such, the team and Product Owner work together to form the backlog, referring back to their focus areas and the overall vision to help guide them. The Product Owner can also introduce tools such as personas to help build an increased understanding within the team of their potential end customers/city dwellers.

Learning points - revisit following retrospectives
This one is really a question of facilitation rather than game structure. At the end of each sprint, following the retrospectives, we'll take a quick look at some of the key learning points that the the simulation is trying to illustrate. These include points such as early delivery, focus on value, continuous improvement and customer collaboration. The idea is that teams, even following the first Sprint, should start to see and understand how these principles and concepts manifest themselves within Scrum. The regular reflection helps to build this understanding through the course of the game.

Global retrospective
As per the original simulation we also end our session with a global retrospective in which all teams participate. To kickstart that we give each team a few minutes to consider their overall experience. To help provoke thought and ideas we provide some broad questions that the teams can use to help support their discussion. These include questions such as how did it feel to be part of a Scrum team, what happened when the Product Owner was absent and what would you do differently if you could build the city again? Following the team team discussions we then take some time to share our insights, experiences and discussion across the whole group.

All in all the Big Apple Scrum Day session was a great success with many people seemingly inspired and enthused about both Scrum and the Lego simulation. I look forward to running many more! Finally, here's some pictures.... 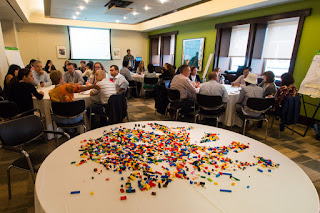 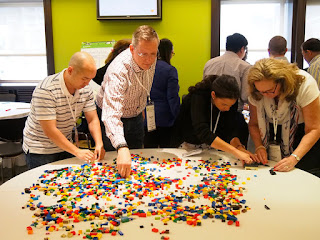 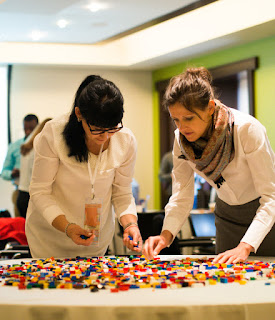 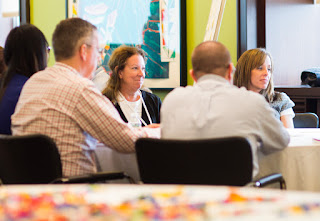 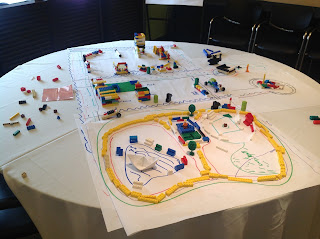 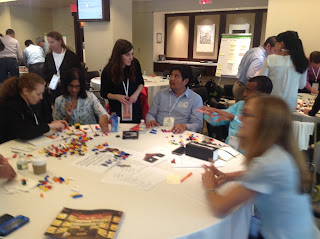 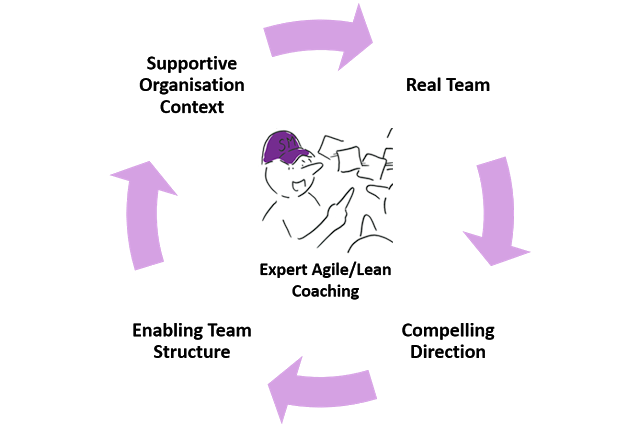